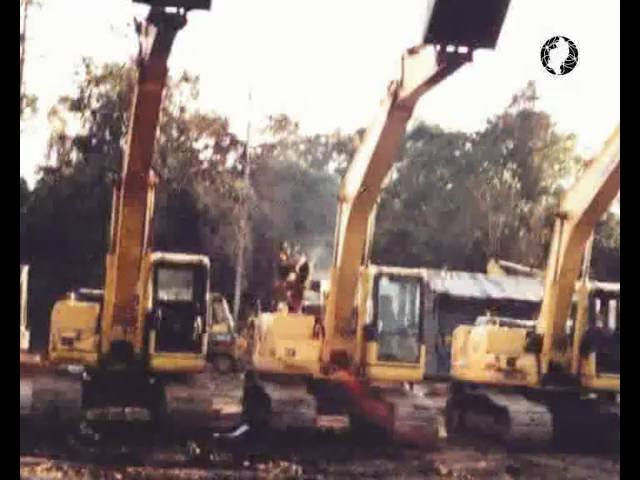 In 2006 Senior General Than Shwe, Burma’s ruling despot, granted the Rangoon-based Yuzana Company license to develop this “agricultural development zone” in the tiger reserve. Yuzana Company is one of Burma’s largest businesses and chaired by U Htay Myint, one of the country’s most powerful tycoons and a recently elected MP.

As the Hugawng case shows, there are no land rights in Burma. The military is allowed to freely confiscate farmers’ lands for Army projects or Army businesses. Powerful tycoons and foreign-backed companies who gain the favor of the ruling military can be granted or buy vast tracts of land and farmers pushed out. Land confiscation is a problem throughout Kachin State and land concessions have been granted to Burmese and Chinese companies to establish huge rubber and other plantations along the Chinese border. 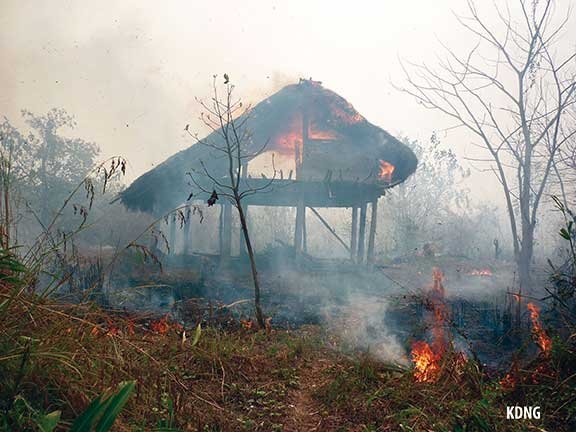 Local villagers tending small scale farms in the valley since before it was declared a reserve have seen their crops destroyed and their lands confiscated. Conflicts between Yuzana Company employees, local authorities, and local residents have flared up and turned violent several times over the past few years, culminating with an attack on residents of Ban Kawk village in 2010. Fourteen villages lie within the zone slated for plantations and are expected to move off their farms into a relocation camp. Hundreds of families have already been forced to move – the camp has little water and few finished homes. Through further threats and intimidation, other families have been forced to take “compensation funds” which are insufficient to begin a new life and leave them destitute.

Over 3,000 workers, many of them survivors of Cyclone Nargis, have been recruited by Yuzana under false promises to work in the plantations and processing factory. They toil for months without any pay; those that are paid receive about US$1 per day. Many cannot save enough money even to return home and remain captive in slave-like labor conditions. 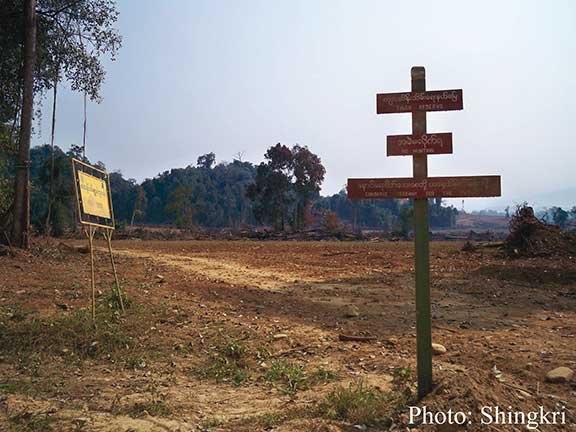 Land clearing and destruction in the Tiger Reseerve. The bottom board says “conserve today for the future.”

The Hugawng Valley Tiger Reserve in Kachin State was declared by the Myanmar Government in 2001 with the support of the US-based Wildlife Conservation Society. In 2004 the reserve’s designation was expanded to include the entire valley of 21,890 square kilometers (8,452 square miles), making it the largest tiger reserve in the world.

Today a 200,000 acre mono-crop plantation project is making a mockery of the reserve’s protected status. Fleets of tractors, backhoes, and bulldozers rip up forests, raze bamboo groves and flatten existing small farms. Signboards that mark animal corridors and “no hunting zones” stand out starkly against a now barren landscape; they are all that is left of conservation efforts. Application of chemical fertilizers and herbicides together with the daily toil of over two thousand imported workers are transforming the area into huge tapioca, sugar cane, and jatropha plantations.

Despite the powerful interests behind the Yuzana project, villagers have been bravely standing up to protect their farmlands and livelihoods. They have sent numerous formal appeals to the authorities, conducted prayer ceremonies, tried to reclaim their fields, refused to move, and defended their homes.

The failure of various government officials to reply or resolve the problem finally led the villagers to reach out to the United Nations and the National League for Democracy in Burma. In March 2010 representatives of three villages filed written requests to the International Labor Organization to investigate the actions of Yuzana. In July 2010, over 100 farmers opened a joint court case in Kachin State to get their lands back. Although the farmers are seeking a solution to their situation by following the law, they still face threats and intimidation by the authorities. The residents of Hugawng Valley are thus at the frontline of protecting not only their own lands and environment but also the rights of all of Burma’s farmers.

We, KDNG stands firmly with these communities and therefore calls on Yuzana to stop their project implementation to avoid any further citizens’ rights abuses and calls on all Kachin communities and leaders to work together with Hugawng villagers in their brave struggle.

According to the 2008 constitution the Army in Burma still remains outside civilian law and can therefore confiscate land and push out farmers at any time. Genuine land rights are needed in Burma to avoid massive plantations that trample on citizens’ rights and have serious negative social and environmental impacts.